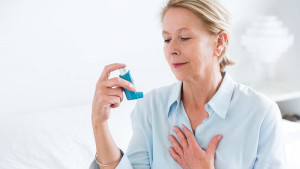 A chronic disease of the lungs that both inflames and also narrows the air passages, is know as asthma. Asthma usually is the cause of many repeated episodes of wheezing which is a sort of whistling sound that occurs when you breathe. Asthma also causes tightness in the chest, a shortness of breathing and of course it causes coughing. Most of the coughing occurs in the early morning or later at night.

Asthma will affect men and women of all ages, but it usually starts to develop at an early age. There are over 22 million people in the United States alone who are known to suffer from the disease. Unfortunately, it is known that over 6 million of these sufferers are children of all ages.

Outside the lungs there are tubes which carry the air in and out of the lungs. Anyone who suffers from asthma has inflammation of their air passages. This inflammation causes the air passages to become swollen and also to be very sensitive. The airways react in a very strong way to any substance that the patient may be allergic to or is sensitive to when they are breathed in.

When this reaction in the airways occurs, the muscles around the air passages tend to tighten up. This tightening causes narrowing and therefore less air can flow in and out of the lungs. The swelling in the air ways can also become worse and this will also make the air passages much narrower. The mucus making cells in the airways begin to work in overtime and create more than normal. Since the mucus is a thick, sticky liquid it can contribute even further to the narrowing of the air passages. This sequence of events can cause a chain reaction to occur thus resulting in some asthma symptoms. Any symptoms can occur any time the lungs and air passages are irritated.

Some of the symptoms are sometimes mild and usually disappear by themselves or do so with mild treatments with some sort of prescribed asthma medication. There are times when the symptoms get much more severe and this is usually when an asthma attack occurs. Asthma attacks are sometimes known as flare-ups. It is very important to get treatment as soon as you start to have any symptoms in order to prevent these symptoms from getting worse and eventually causing you to have an asthma attack. Extremely severe attacks of asthma might mean immediate medical attention in order to prevent the possibility of death.

Asthma is not curable but is treatable. Even on the days when you feel well, the disease is still there and you may have a flare-up without notice. With the knowledge and the treatments that are available today, most asthmatics manage to control their disease reasonably well. They do not have many symptoms and are able to lead normal and very active lives while sleeping through the night and not having any disturbances from their asthma. The management of the disease means taking an active role to ensure the successful understanding and treatment of asthma. It is important to ensure that you have a good relationship with your doctor and anyone else who is a part of your treatment plan for your asthma.