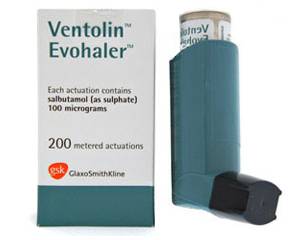 Ventolin Inhaler is aerosol for inhalation comprising a single dose of 100 mcg salbutamol. Other ingredients: nebuliser gas HFA 134a.

This medicine is used for bronchial tubes and lungs treatment. Ventolin inhalers are applied at asthma attacks arrest.
It is antiasthmatic drugs and stimulator of beta-adrenergic receptors.
Active substance: salbutamol 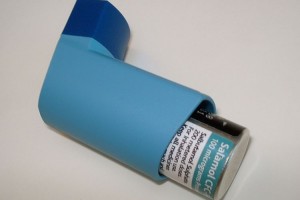 It prevents bronchospasm induced by allergens. Asthma inhaler is used for prevention or relief of bronchospasm. The drug effects on insulin secretion glycogenolysis, reduces potassium concentration in blood plasma, and has hyperglycemic lipolytic effect, can cause acidosis. At therapeutic doses Ventolin inhaler for asthma has no adverse effects on cardiovascular system, it causes high blood pressure. It is an extension of coronary arteries, it has a positive chronotropic and inotropic effect.

Ten to twenty percent of administered dose Ventolin inhalation reaches lower respiratory tract. The remainder of drug delivery device is deposited in nasopharynx. Asthma drug dose which has reached lower respiratory tract, reaches systemic circulation, it is not metabolized in lungs. The drug binds to plasma protein at 10%. Ventolin takes effect after four or five minutes after inhalation, duration – from four to six hours.

The drug, which came into the systemic circulation, is metabolized in the liver and excreted in the urine in unchanged form and as phenol sulfate connection. Part of the drug which came from the nasopharynx to the gastrointestinal tract, is absorbed and metabolized in the liver and then phenol sulfate compound excreted by the kidneys. About ninety percent of the drug is excreted in the urine, four percent – with bile. Most of Ventolin eliminated from the body within 72 hours. The drug crosses the placental barrier.

Ventolin inhaler is applied in bronchial asthma: prevention and relief of bronchospasm, as component in complex bronchial asthma treatment (including status asthmaticus). As prevention it is applied directly before contact with allergen, or before exercise. Ventolin is used in chronic obstructive pulmonary disease as well, which is accompanied by reversible bronchial obstruction. 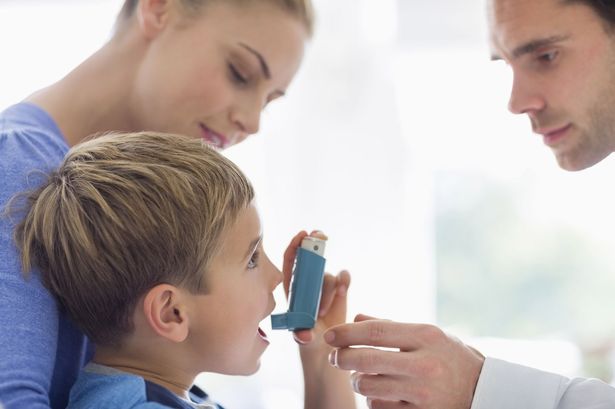 Ventolin is not intended for injection. It is introduced by inhalation using a nebulizer with a mask, endotracheal tube or T-tube. When hypoventilation it may occur a risk of hypoxia, when inhaled air may be enriched with oxygen. Ventolin is used without dilution, but prolonged inhalation is possible if necessary (more than ten minutes), drug may be diluted with sterile 0.9% sodium chloride.

The drug should be used in well ventilated areas, as part of formulation upon inhalation into environment. This is especially important in hospital, where nebulizers can be used by multiple patients.

Initial dose of Ventolin inhalation administration via nebulizer is 2.5 mg, but may be increased to five milligrams if necessary. Inhalations may be performed up to four times a day. In a hospital environment, with marked airway obstruction, adult dose can be increased up to 40 mg / day.

Clinical efficiency of Ventolin in children under the age of eighteen months by administration via a nebulizer has not been studied.

Ventolin Evohaler is designed for use in children over the age of two years and in adults. Patients who have difficulty with coordinating spray asthma inhaler, it is necessary to use a spacer. For younger children, an apparatus Babyhaler.

Adults. Bronchospasm cupping: one hundred to two hundred micrograms (one or two inhalations).

In applying the drug it may decrease potassium level in blood plasma. It may also occur:

Cardio-vascular system often tachycardia, sometimes there is a violation of cardiac rhythm:

Ventolin Inhaler may cause peripheral vasodilation. When using Ventolin it may occur paradoxical bronchospasm, with a significant increase in shortness of breath after inhalation. In such cases, medication should be overturned, patient is chosen alternative therapies. When inhaled Ventolin occasionally irritation of oral cavity and pharynx mucous membrane is observed. The drug can cause muscle cramps.

Hypersensitivity to any drug component. Do not use this drug in children up to six years. It should be used with caution in patients with:

During pregnancy, Ventolin inhaler for asthma treatment is prescribed only when benefits to mother outweighs any potential risk to fetus. There has been no well-controlled clinical studies of Ventolin teratogenicity. There is information about birth of children with polydactyly those mothers who during pregnancy used Ventolin, but a clear link between disease occurrence and drug intake is not established. Application of drug during pregnancy is possible, because risk of placental hypoxemia to fetus against the backdrop of uncontrolled asthma in mother far outweighs potential risk of taking this drug. However, you need to use Ventolin for asthma with caution as its reception may cause hyperglycemia and tachycardia in mother and fetus, as well as weakness of labor, lowering blood pressure and pulmonary edema.

Interaction with Other Drugs 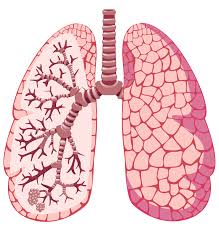 You can not simultaneously use Ventolin and selective beta-blockers (propranolol). Thyrotoxicosis strengthens tachycardia. Also it enhances drugs action that stimulate central nervous system. It increases likelihood of arrhythmia in patients receiving cardiac glycosides. Ventolin inhaler is not contraindicated to patients who are taking MAO inhibitors. Theophylline and other xanthines at reception, along with Ventolin increase risk of tachyarrhythmia. When taken together with anesthesia means and levodopa ventricular arrhythmia may occur. Ventolin may increase intraocular pressure by sharing Ventolin with anticholinergics. Corticosteroids and diuretics may enhance hypokalemia caused by Ventolin use.

When these symptoms occur it means you face Ventolin overdose:

There may be observed respiratory alkalosis. Treatment is symptomatic, appointed agents are from group of cardioselective beta-blockers.

Store at temperatures below 30 degrees Celsius. Avoid exposure to direct sunlight. Do not freeze. Shelf life – two years. Do not use after expiration date.

The most common generics of Ventolin are:

In the treatment of bronchial asthma Ventolin must not be the sole or main component of therapy. Increasing demand for the use of β2-agonists short-acting to control asthma symptoms is indicative of disease progression. This state is threat to patient’s life, so treatment plan must be revised; decide whether to increase dose of corticosteroids. In these patients, daily monitoring is performed by peak expiratory flow rate. To solve issue of increasing Ventolin doses may be made only by a doctor, as taking high doses of drug can lead to adverse consequences.

Patients should be taught how to use aerosol inhalation or nebulizer, effectiveness of this treatment depends on it. Avoid contact with spray or solution for inhalation with eyes. When using nebulizer it does not require synchronization with inhalation breath, so Ventolin Nebula is preferred for use in children and elderly patients.