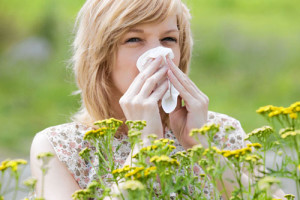 Hay fever is one of the most common seasonal allergies in the United States. One out of three people suffer from hay fever every year. Hay fever is caused by ragweed, and it affects people in the fall of the year. If you live in the Midwest, or in the Eastern states, you should be familiar with ragweed. One ragweed plant can produce a billion grains of pollen. Ragweed grows mainly in the country (rural) areas, but the pollen is so light it can be carried on the air currents for many miles. People in the city, as well as in the rural areas can suffer from ragweed allergies. There are 17 different species of ragweed plants in the United States. People who are allergic to ragweed are usually also allergic to sage and other similar weeds.

To about 70 percent of us, ragweed pollen is completely harmless, but the remaining 30 percent of us suffer with sneezing, runny eyes, runny nose, stuffy head, and sinus headaches. Many people who suffer from ragweed allergies complain of having an irritated and itchy feeling in the back of their nasal passages and upper throat area. Severe allergies to ragweed can bring on asthma symptoms, and chronic sinus problems. Some people actually have sleep disturbances as a result of their allergies. People who are allergic to ragweed get these symptoms because their immune systems have mistaken the harmless pollen for a disease causing bacteria or virus. The immune system can’t see that the pollen is harmless, so the body sets up a full attack on the allergen (pollen). The runny nose, the runny eyes, and the watery nose are all manifestations of the body trying to get rid of the foreign invader. The immune system has an arsenal of weapons to fight a perceived enemy. When the immune system senses an allergen, it sends antibodies to surround it. The antibodies tell other cells in the immune system to release histamine, which actually initiates the allergy symptom to manifest.

If you have severe allergies to ragweed, you should stay indoors when the pollen count is at its highest. You may think you can be protected by wearing a surgical mask, but that won’t help, because the pollen can pass right through the mask. Ragweed pollen is at its highest between 10 a.m. and 3 p.m., so if you have severe allergies to ragweed pollen, you should stay indoors, if at all possible.

To help prevent exposure to pollen, many people who have allergies to ragweed and other pollens keep their doors and windows closed as much as possible. They also keep their air conditioner on in their home and their cars, so that the air is filtered. Oftentimes, individuals who have allergies change clothes as soon as they come in from the outside, and shower at bedtime to keep their bodies free from pollen as much as possible. If you have allergies, you might stay inside more during the peak hours for high pollen levels. If you have frequent allergies, it would help you to put air purifiers in your home. The air purifiers with the HEPA filter are the best for removing dust mites, mold, pollen and other particles from the air in your home.